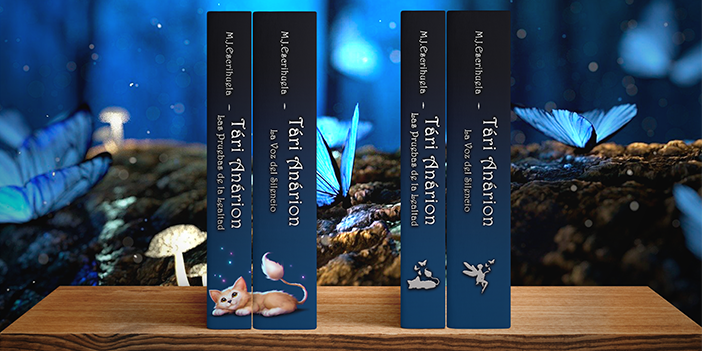 For those of you looking for a quick answer, you should know that the special edition of Tári Anárion only varies in the design of the spine of the covers of each of the novels in the bilogy. The content, format and price for both editions are identical and will remain the same.

So, why offering a special edition? Read on if you’re curious!

Tári Anárion’s saga is composed of two books, “The Loyalty Trials” and “The Voice of Silence”, and the design of the covers of both novels was thought so that, when placed one next to the other, they formed Gurky’s image. Nevertheless:

If you are a new reader and you are going to acquire both books, our recommendation is that you opt for the special edition, since it is the original design of the cover and having Gurky on the spine of the novels is a detail that we love.

If you are a reader who already owns the first edition of Tári Anárion, you have the option of purchasing only “The Voice of Silence” in its standard edition … or you can purchase the second edition of “The Loyalty Trials”! We remind you that this not only comes with a new cover design according to its direct sequel, but also includes a map of Noiran and a totally new prologue, as well as a review of erratas.

We hope you enjoyed learning more about the special edition! Do not hesitate to leave us your comments and / or questions below.

We wish you a happy day full of magic, adventures and many many letters!